Off Topic: How Rent Works in Fisheries

In economics, the term “rent” is often confused with economic profit. Profit (π) can be measured over the short-term or the long run. In the short term, profit is equal to total revenues minus total costs of production (π=TR-TC). Over the long run, marginal costs accumulate and matter more than short-term profits. This applies to fisheries, but not in the traditional sense.

When fishermen set sail, they begin financially underwater. They start at a loss because they input their own capital (money, gear, technology) and labor for the opportunity to fish, their “fees” to maintain the fishery. These investments are collectively called rent (also represented by π), the in situ value of the fishery. Rent, by definition, is different from costs of production in that it actually does not contribute to production whatsoever. It is unearned income that, in the end, goes to the fishermen as profit. The connection between rent and fisheries is best described by the Gordon-Schaefer Model, the center of bioeconomics (see below). 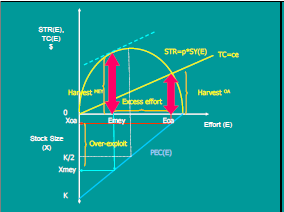 Though the G-S Model seems convoluted and daunting, it can be easily broken down into its three main components: a sustainable total revenue curve, a total cost curve, and population equilibrium curve.

Sustainable total revenue (STR) is the product of price and sustainable yield, represented by the curve above the E-axis and by the equation below:

The total cost (TC) curve graphically depicts the cost (c) of fishing efforts on a per-effort basis. It is represented by the equation below:

The inherent cost of fishing, rent (π), can then be determined by subtracting Total Costs (TC) from Sustainable Revenue (STR) via this equation:

Rent is at its highest at the maximum economic yield (MEY). At MEY, fishing efforts drive the greatest difference between STR and and TC. Because those efforts are small and regulated, the fish stocks are underexploited. This leaves domestic fisheries vulnerable to foreign competition and leads us to the last component of the Gordon-Schaefer Model.

The population equilibrium curve [PEC(E)] tells us graphically how fishing effort affects the total biomass of the targeted fish species. It is represented by the following equation:

The population equilibrium curve meshes very well with the other two curves. It reveals the hidden relationship between revenue, effort, and population size. At first, effort and revenue increase as population size decreases from carrying capacity (maximum number of fish a habitat can sustain). Beyond the point of maximum sustainable yield (when population size is half of carrying capacity), fishing effort maxes out and total revenues level off. Rent follows suit as fish stocks collapse from overexploitation.

Unrestricted, open-access fisheries are often heavily exploited on both the biological and the economic level. Without regulation, rent dissipates. Costs match revenue, and rent becomes zero. This is represented by the pink arrow on the right of the graph above.

This lesson with rent demonstrates the importance of regulation in common pool resources. It is necessary that we understand the finiteness of those resources—our fisheries—so we can manage them appropriately.

Andrew Blitman is a poet and artist who is also the webmaster of this blog. He is the published author of 13 books, including "Birthright 2012: A Voyage into the Heart and Soul of Israel" and the "Wild Writers" Series. He can be reached at this e-mail address: andrew.blitman@gmail.com View all posts by Andrew Blitman