The Biological Profile of the Malaria Parasite

Malaria under the microscope.

An Introduction to Malaria

Malaria, from the Latin for “bad air”, is a disease that has plagued humanity throughout its existence. The disease can be identified by its primary symptoms, such as periodic fevers and chills, splenomegaly, and anemia. As early as 5000 years ago, the Chinese and Egyptians reported cases of malaria in their writings. Humans carried it from Africa to Rome by 200 BC, metastasizing throughout continental Europe by the twelfth century and England by the fourteenth. During the Golden Age of Exploration, European colonists and conquistadors transported Plasmodium malariae and Plasmodium vivax to the Americas. It is believed that Plasmodium falciparum traveled with African slaves to the New World, and as a consequence, that by the early 1800s malaria had conquered the globe (1).

P-falciparum and P-vivax cause 95% of malarial infections, accounting for 300 to 500 million worldwide (1). However, P-falciparum, responsible for malignant malaria, accounted for 91% of the 247 million human malarial infections (98% in Africa) as of 2006 (2). Malaria is present in almost one hundred countries, home to 2.4 billion people (or 40% of the human population). Africa suffers the most from malaria, with as many 90% of malaria-related deaths occurring on the continent. Young children are hit hardest by the disease, and usually die once infected. “The number of cases outside tropical Africa may be as high as 20 million, with about 80% being found in Asia where severe drug resistance has developed in the Indochinese peninsula” (1). The spread and evolutionary success of Plasmodium falciparum—the most virulent and well-studied apicomplexan—in particular can be attributed to its distinct cellular structure, its unique life cycle, and its unusual metabolism.

The Evolution of Plasmodium falciparum

Malaria has probably been around before humans evolved from their primate ancestors. Plasmodium reichenowi, the closest relative of P-falciparum, is a parasite that targets chimpanzees, the closest extant relative of modern humans. A phylogenetic comparison of gene trees constructed from plastid, mitochondrial, and genomic DNA suggests that these two species are not closely related to the other four species that give people malaria (vivax, ovale, knowlesi, malariae). Phylogenic comparisons imply that P-falciparum and P-reichenowi have ties to species that parasitize birds instead of mammals, and that convergent evolution led them to target mammals (and eventually humans) like the other four Plasmodium species (3). However, it has been argued that this is not the case, and that mammal parasitism evolved only once in the Plasmodium genus. A study by Yokoto and Elisei supports this idea; comparisons of mitochondrial DNA between three related genera of malaria parasites—Plasmodium, Haemoproteus and Hepatocystis—showed great specialization of the parasites to their mammalian, reptilian, and avian hosts, respectively. In fact, the analysis of cytochrome b in the study provided strong evidence that the switch from reptiles to mammals occurred only once during the evolution of these organisms. This evidence (added to the current knowledge about the association of the malaria parasites with their vertebrate hosts) allows us to suggest, at least considering the species included in this study, that the adaptation in mammals had required a high level of specialization. Hence, the acquisition of this host class had culminated in an evolutionary dead end for the mammalian malaria parasites (4).

A phylogenetic tree of P. falciparum and its relatives. (4)

Molecular clock analysis, the process of using fossil constraints and rates of molecular change to determine the time in geologic history when two species or other taxa split, suggests that P-falciparum diverged from P-reichenowi at about the same time hominids diverged from chimpanzees (four to seven million years ago). Low levels of polymorphism within the P-falciparum genome suggest that this split took place much more recently. However, it has been clarified through the sequencing of the genes responsible for sialic acid production that P-reichenowi is the ancestor of P-falciparum and that the split occurred as recently as 10,000 years ago. This is important information for doctors and geneticists because this could explain why the gene for sickle-cell anemia evolved in the human genome. This lethal malformation of red blood cells causes severe clotting and anoxia, yet its presence in a person that is heterozygous for the allele (has one dominant allele and one recessive allele for sickle-cell anemia) guarantees malaria resistance for that individual. Plasmodium falciparum’s unique cellular structure adds mystery to its more distant evolutionary origins.

It is believed that apicomplexans like Plasmodium are the product of endosymbiosis because they possess an organelle unique to their Phylum. The apicoplast, as it is called, is an essential plastid. It is a quintessential part of the apicomplexan anatomy, something similar to or descended from a chloroplast. The apicoplast contains DNA fragments that suggest it once had the ability to make chlorophyll. Much like a chloroplast, the apicoplast possesses four membranes and what appear to be thylakoids. An ancestral apicomplexan likely engulfed (or was invaded by) a eukaryotic alga, and preserved the algal plastid, the product of a far more ancient endosymbiotic event (5).

While its function is not fully known, it appears to be critical to the metabolism of fatty acids, isoprenoids, and heme. About 35,000 bases comprise the apicoplast genome, encoding for thirty proteins. Antibody localization techniques and effective use of Green Fluorescent Protein have detected that 551 other proteins (about 10% of P-falciparum’s nuclear-encoded proteins) are transported from the nucleus to the apicoplast via specific signal peptides. Nuclear-encoded apicoplast proteins include housekeeping enzymes involved in DNA replication and repair, transcription, translation and post-translational modifications, cofactor synthesis, protein import, protein turnover, and specific metabolic and transport activities. No genes for photosynthesis or light perception are apparent, although ferredoxin and ferredoxin-NADP reductase are present as vestiges of photosystem I, and probably serve to recycle reducing equivalents (6).

Plasmodium falciparum, like other members of the malarial family, depend on the female Anopheles mosquito to spread from one human host to another. It has a complicated life cycle, and depends on both a human and mosquito host to propagate future generations.

Prior to infecting the human, Plasmodium falciparum inhabits the salivary glands of the mosquito. At this point, the parasite is in the sporozoite stage. These spores survive the trip from the mosquito into the human bloodstream. As the mosquito siphons blood, it injects a small amount of saliva into the wound. Rich in anticoagulatory and anti-inflammatory enzymes, the saliva prevents clotting and deactivates pain receptors within the skin. About 5-200 sporozoites circulate inside the human bloodstream before settling in the liver.

Next, the sporozoites infect hepatocytes and transform into trophozoites. They lose their surface coats and create parasitophorous vacuoles inside the liver cells. Over the course of about five to six days, the Plasmodium nuclei divide multiple times. The cells increase in size but do not split. After at least five days, the trophozoites segment and differentiate into merozoites. These merozoites are then released from the hepatocytes and then enter the erythrocytic portion of their life cycle. They no longer affect liver cells; they now target red blood cells. This portion of the life cycle is responsible for the fevers, chills, and extreme anemia characteristic of the malaria disease. 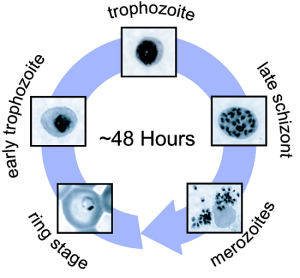 The stages of the P. falciparum life cycle, from a microscopic view. (9)

At the schizont stage, the parasite copies its DNA many times without undergoing cell division. Then, the schizonts fracture and differentiate to form 16-18 merozoites in the red blood cell. The erythrocyte lyses, releasing the merozoites into the bloodstream. The parasite is in the bloodstream for about a minute before it enters another red blood cell. The cycle continues until the human host dies. If the person is heterozygous for sickle-cell anemia, then (s)he is protected from the symptoms of malaria. 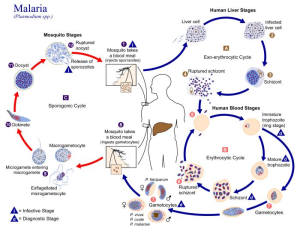 Because the P-falciparum genome has been fully sequenced, many aspects of the parasite’s biology can be explained. The parasite possesses a unique metabolism that shifts with its stage in the life cycle. While much of the parasite’s life is spent in dormancy, it awakens for growth during the erythrocytic stage.

During the erythrocytic stage, it uses intracellular hemoglobin as a food source. The protein is broken down into peptides, and the heme group is released and detoxified by biocrystallization in the form of hemozoin (7).

However, most of its energy is derived from anaerobic glycolysis, with pyruvate being converted to lactate. Genes for all of the enzymes responsible for the pentose phosphate pathway have been detected in the P-falciparum genome.

Protein metabolism, however, depends entirely upon the host cell. It has been hypothesized that the parasite obtains all, or nearly all, of its amino acids by salvaging from the host or through the degradation of hemoglobin. This is supported by the fact that genomic analysis has found no enzymes necessary for amino acid biosynthesis, except for glycine-serine, cysteine-alanine, aspartate-asparagine, proline-ornithine, and glutamine-glutamate interconversions (5).

Lipid metabolism is believed to be connected to the apicoplast. P-falciparum is unable to synthesize purines by itself. Instead, it transports and converts purines from host cells. It can also produce pyrimidines de novo using glutamine, bicarbonate, and aspartate (5).

According to WHO guidelines 2010, artemisinin-based combination therapies (ACTs) are the recommended first line antimalarial treatments for uncomplicated malaria caused by P. falciparum. The following ACTs are recommended by the WHO:

Severe cases of malignant malaria require intravenous administration of artesunate, artemether, and/or quinine to purge the bloodstream of apicomplexan parasites. Other drugs, like Lariam and Malarone, are effective but have potentially serious side effects. Lariam can cause psychotic symptoms like hallucinations, while Malarone can make the patient oversensitive to light.

The battle against malaria is a constant struggle between human technology and the parasite. Repeated administration of antimalarial drugs has effected the evolution of antibiotic-resistant strains of Plasmodium. These new variations of the Plasmodium species continue to challenge doctors, scientists, and humanitarians around the world as they try to extinguish the malarial wildfire. Rising sea levels and global temperatures will only exacerbate the spread of malaria across the planet and hinder efforts to control the disease.

Malaria, Latin for “bad air” is an ancient disease that has shaped the course of human history. Its presence has affected the human genome, and revealed to us how disease can be spread by vectors. Although a historic disease, malaria will ultimately become one of humanity’s greatest foes in the future.

Andrew Blitman is a poet and artist who is also the webmaster of this blog. He is the published author of 13 books, including "Birthright 2012: A Voyage into the Heart and Soul of Israel" and the "Wild Writers" Series. He can be reached at this e-mail address: andrew.blitman@gmail.com View all posts by Andrew Blitman